On Tuesday, the US Dollar fell for the fourth day in a row following US President Trump’s critical comments regarding the recent interest hikes by the Federal Reserve. The US President wishes the Fed to support the economy by keeping rates low. Global stock markets were flat to higher and cautious ahead of the FOMC minutes and US-China trade talks on Wednesday. In the US, the S&P 500 printed new record highs at 2,873.23 intra-session, but did not manage to close at the highs. The Asian session was positive with the Hang Seng and Nikkei up 0.6%, whilst the Australian benchmark closed 0.3% lower on political uncertainty.

Ahead of the US-China trade talks and FOMC minutes, risk sentiment is cautiously positive with European shares all trading in green. The FOMC minutes are expected to show information that the US is on a consistent path and on course for two more rate increases this year. According to the implied probability on the fed funds futures, there is a 90% chance for a hike to 2.00-2.25% at the next FOMC meeting on 26th September.

FX markets are seeing EUR/USD coming back higher as the EU/US yield-spread is decreasing in addition to Italian yields cooling off. EURUSD is testing resistance at the 50-day SMA at 1.1612 before next resistance at 1.1630-area. 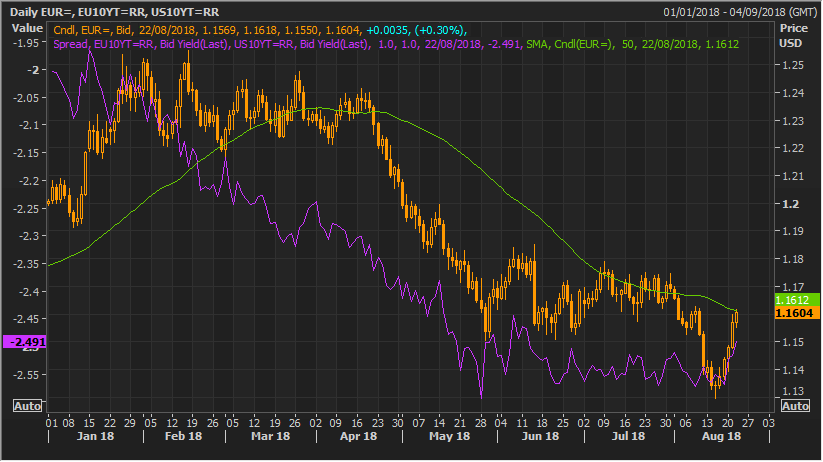 In Turkey things have calmed down a bit, but the crisis is far from over. As things have escalated investors have sold off Turkish assets resulting in Turkish yields exploding to record highs – yield on the 10-year benchmark are on the year currently up 945 bps at 20.9% after being up almost 1200 bps early last week. To make matters worse, S&P and Moody’s cut Turkey’s credit rating further into junk territory on Friday. As the credit rating has worsened, the cost of insuring the Turkish debt has increased as seen in the credit default swaps, which are at highest levels since 2008.

In an effort to calm the markets, Turkey managed to secure a $3bn swap deal with Qatar on Monday.  This week, the Turkish financial markets are closed as EID is celebrated, but tensions are still present. On Wednesday, the national security advisor to the US President said that Turkey made a “big mistake” in not freeing the American pastor, which is charged for terrorism in Turkey and the pastor’s lawyer has announced that he will appeal to the Turkish constitutional court.